The table below was taken from data provided by the Office for National Statistics and shows the number of jobs split between Manufacturing (including Construction) [Orange line] and Services [Blue line] between 1978 and 2019 taking each quarterly return. 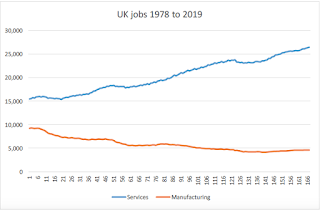 Looking at services, the biggest increases were Health and social care 2.3 million, IT and Management Services 1.3 million and Accommodation, food and beverage 1.2 million and education 1 million.

In 1914, textiles, coal, iron and steel, and shipbuilding employed almost a quarter of the total workforce. The comparative percentages for 1978 and 2019 are 14% and 2% respectively. The 'new' industries of motor vehicles, plastics and electrics rebuilt manufacturing jobs between the wars and, in the fifties and sixties, making up 11% of total jobs in 1978. They make up 3% in 2019.

If we go back further, David Cannadine in his book, Victorious Century, offers again broadly comparable figures. Agriculture came first with just under 2 million, followed by 1million in domestic service. Next came cotton textile workers at half a million; whilst this number was equally split between men and women, men predominated in agriculture and women in domestic service. Next in number came building craftsmen, labourers and then a third of a million milliners, dressmakers and seamstresses, and 300,000 wool workers. There were 200,000 coalminers. Instead of listing the remainder, Cannadine observes that there were more blacksmiths than iron workers and more working with horses on roads than with steam on railways. The total employed workforce in 1851 was 8.5 million (out of a total population of 27 million) compared to 31 million in 2019.

I look forward to getting access to hard copy of the Censuses to assess more clearly how employment patterns have changed.

The crash of the 1930s was in the context of an economy more reliant on manufacturing. Would a crash from Covid19 have the same impact given the massive swing towards services?

Six weeks ago the UK economy depended on our passion for spending, buying things and experiences. Could this change, and, if it does, what would be the impact?
Retail was suffering in any event, but will we have kicked our addiction? Zoe Wood asks someone good questions in her piece in the Guardian.

I think usually a very great article. You make this data curiously and locks in. You donate readers a part to think around and I appreciate that kind of composing. Uniccshop