The late Jo Cox gave this country a great deal, but not least when she said, "we are far more united and have far more in common than that which divided us."

The Queen perhaps continued the theme when she said to the Sandringham WI, '“As we look for new answers in the modern age, I for one prefer the tried and tested recipes, like speaking well of each other and respecting different points of view; coming together to seek out the common ground; and never losing sight of the bigger picture.”

In The Guardian of Saturday 16 February, Ian Jack quoted both in his piece about a visit to Brexit voting Boston in Lincolnshire with a couple of people from Remain voting Lambeth in London.

In the same paper Jonathan Freeland lauded the action of school children in demonstrating against those of their elders who ignore global warming. He offered his argument with some delicious humour:

"Such is the upside-down, topsy-turvy state of our world, that the children are now the adults and the adults are the children. In Westminster, our supposed leaders – men and women of mature vintage – keep stamping their feet and demanding what no one can give them.

They insist they should be allowed to gobble up all the birthday cake and still have cake left to eat, threatening to storm out of the European Union and slam the door behind them. As Dominic Grieve, the former attorney general, rightly puts it: “Threatening to leave is the behaviour of a three-year-old who says that they are going to hold their breath if they do not get the toy that they want.”

In Washington, meanwhile, Donald Trump, aged 72 and three-quarters, has screamed and screamed and screamed until he is sick, pounding his little fist on the table as he demands money for the big wall of bricks he wants to build, and today declaring a national emergency to get his way. The House speaker, Democrat Nancy Pelosi, assessed the situation accurately last month, when Trump was shutting down the government: “It’s a temper tantrum by the president. I’m the mother of five, grandmother of nine. I know a temper tantrum when I see one.”

Marina Hyde then despaired at how our adult leaders are spending the days as the clock ticks down to Brexit:

" If we crash out of the EU without a deal, I hope someone publishes a coffee-table book detailing each of the irrelevant arguments we had on each day as the Brexit doomsday clock ticked down. T-minus 42 days: was Churchill a shit or not? T-minus 41 days: where do you stand on the Boer war?

There is something truly grotesque about all this playing out as children around the country and the world strike from school to protest against climate emergency. In Westminster, a generation who will never be forgiven don’t even have the thing they won’t be forgiven for on their radar. It is left, shamefully, to actual kids to point it out. With absolute ironical inevitability, then, May made the time to criticise the nation’s young for their actions. Apparently, the climate strike “wastes lesson time”. Just to be clear, Prime Minister, on Thursday a party colleague requested an emergency parliamentary debate on Winston Churchill, who literally DIED IN 1965. Can you grown-ups give the kids another lecture on time-wasting, please?"

I strikes me that we, 'ordinary' people, need to talk to each other. Our politicians are failing us in a big way. They must not be allowed to succeed. So, whether you favoured Brexit or wanted to Remain, let's start talking before it's too late.

What's more, I will offer a venue for that conversation. Who's up for it? 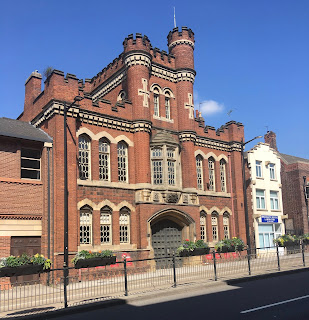 Posted by PhilWriter at 19:10 No comments:

Our friends at the Bailgate Independent suggested that I might come up with a Book of the Month recommendation. Bliss or what?

Here is my first from the February edition:

They then asked about plans for this year's festival: 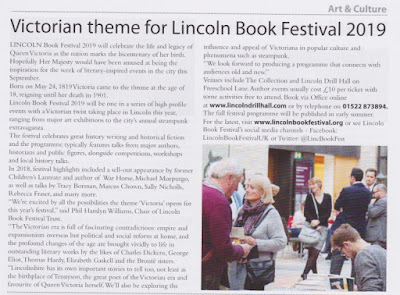 I hope you agree there is much to look forward to.
Posted by PhilWriter at 14:00 No comments:

Be a Brick and Buy a Brick

It is true, I am not sleeping for worry about the future of the Drill Hall.

We have such an amazing team who are working tirelessly to keep this vital venue open at the heart of our city. So I was delighted to read in my Lincolnshire Echo (see below) an article written from an interview I gave on BBC Radio Lincolnshire. My delight was at the accuracy of the reporting and that fact that I had obviously said what I really wanted to say! (not always the case on a live interview).

So, what were these things I really wanted to say?

"Lincoln Drill Hall being a place for the people of Lincoln has continued for the last 130 years."

Peter Hennessy writes: Putting up prices is not an option according to Mr Hamlyn Williams. "Our purpose is to bring art and culture to the people of Lincoln, that's why we're here. We have to have tickets that are affordable - we want more and more people to come."

My predecessor as chair of trustees, Phil Cosker, puts it brilliantly in the animated video on the website. I have also written on Why it matters, on The Proms, on CompassionateLincoln Big Soup (next one 23 February), on Lincoln in WW1 and on some wonderful memories from years gone by.

That's why we are asking people to Be a Brick and Buy a Brick. 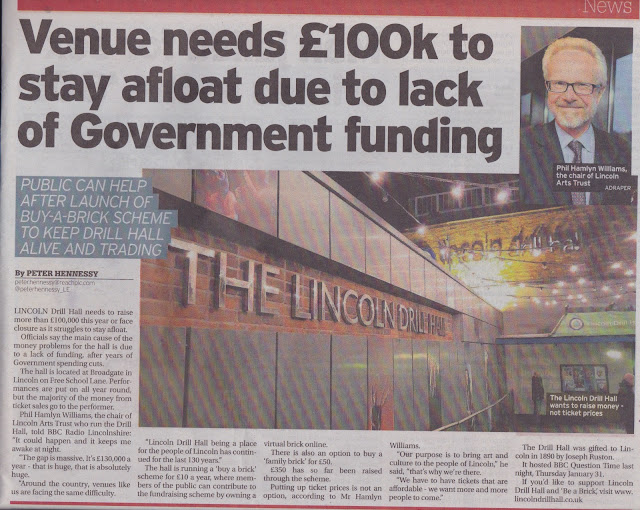 Posted by PhilWriter at 14:23 No comments:

My Christmas present from my lovely children - at the Barbican

Not for the first time am I in the Barbican awaiting a production by the RSC. Last year it was all about revenge with Titus Andronicus; this year it is darker still with The Scottish Play.

My lovely children get together to buy me theatre tokens and I choose something that will get me thinking.

The programme made a good deal about the play being about time; indeed there was a digital clock on stage. For me the casting of three young girls as the witches was far more powerful. Shakespeare was writing amid the Jacobean witch hunts. Men were portraying witches as evil hags in league with the devil; in truth they tended to be intelligent women (always hated by men) with skills of healing. Tracy Borman's wonderful debut novel, The King's Witch, shows this vividly. So the casting of children made it clear that evil was not external to Macbeth and his wife, but within them, as indeed it is within all of us. No excuses. 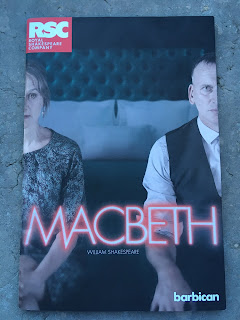 Posted by PhilWriter at 13:40 No comments: