Would one super festival be a better stage for Lincoln's talents?

The Lincoln year is punctuated by festivals of one kind or another; my question is whether we might be better served were they brought together in one - say - two week period in the summer? This could be put another way, would a single Lincoln Festival be a greater attraction for our visitors?

The Festivals in the Lincoln calendar, for example the Book Festival, The Chamber Music Festival and Frequency, are well supported, of good quality and greatly enjoyed. This year a number of different events are being brought together around the Magna Carta weekend and the Magna Carta celebrations more generally. These embrace film and beer as well as street entertainment and offerings for big outdoor audiences at the Castle.

The Drill Hall plays its part in the existing festivals and also in the Magna Carta events. For the weekend itself, we act as ‘book ends’ with dance at the beginning and music at the end, and quite a bit in the middle as well. The Dance, a piece entitled Refugees of the Septic Heart from Tom Dale productions, is a great example of how to offer an alternative view. In the early discussion about the commemorations of the 800th anniversary of the sealing of Magna Carta, I became worried that it might focus too much on the historical event or just attract ‘establishment’ celebrations.

Tom Dale’s piece is distinctly alternative, it questions established values, in many ways it does what the founding fathers of America believed Magna Carta did; it stands up to those who seek to exercise power. Specifically it explores how the power of money is abused. It does this with dance but also with digital imagery and music. It is a first for Lincoln and one to be proud of since, having been a hit at the Edinburgh fringe, the production will next be performed in Hong Kong.

The music at the end of the Magna Carta weekend is quite different and will be the result of Sinfonia Viva working with local schools and the creative efforts of the children.

These two events demonstrate something of what the Drill Hall is about, giving space to new and adventurous work and being a place where Lincoln people can participate in performance. Of course the Drill Hall is about more than this; its role is to be there for a whole range of Lincoln communities and offer, perhaps not something for everyone, but certainly a variety of performance  that will be enjoyed by most.

So, back to the question of the Festival, do we want a big Lincoln Festival? It would give audiences the chance to experience a number of different forms of performance: theatre, film, dance, music and literature. It could be built round a theme, as the Magna Carta weekend is. It could say something about what is special about Lincoln: a vibrant modern city in an historical setting. Importantly, it could give space for home grown talent to perform.

Well, perhaps the Magna Carta weekend will be a good taster. My instinct is that we will want a bit of both. Certainly something big that brings the city together and offers a broad spectrum of events, but also focussed festivals at other times of the year. We could take a leaf from Cheltenham’s book and drawn them together as The Lincoln Festivals.

Published in the Lincolnshire Echo of 4 June 2015
Posted by PhilWriter at 14:02 No comments:

What is Magna Carta?

It could so easily have been lost.

For ten short weeks in the summer of 1215, a charter carrying King John’s seal tied his hands. He hated it with a passion; it was outrageous that the King’s power should be limited, that he should be answerable to his barons. The hate was so strong that he went cap in hand to the Pope to have it annulled, to be as if it had never happened.
The charter, on a single sheet of parchment which now sits in Lincoln Castle, was probably written out by the clerk to the Bishop of Lincoln, an office, the modern equivalent of which, I held from 1996 to 2003. In September 1215 the charter had become worthless and so I guess many Bishops’ clerks, for copies of the charter had been made for all Bishops, would just have discarded them. The clerk to the Bishop of Lincoln didn’t.

The charter would have taken a great deal of careful writing out - some 3,500 perfectly crafted words. The clerk, though, may well have studied at the medieval ‘University’ of Lincoln, then based at Lincoln Cathedral and by many accounts as well regarded as Oxford or Cambridge. He would have been following in the footsteps of another clerk, Stephen Langton, who there studied books about the power of Kings and who later, as Archbishop of Canterbury, had a big influence over the drafting of the charter. In the 12th century power was the hot topic; people from all parts of Europe were asking questions about power: how to stop it being abused, how to limit it, how to make the powerful accountable. The books Langton may have studied are still in the Cathedral Library.
So the clerk to the Bishop of Lincoln would have known that the annulled charter was truly important and must at all costs be kept.

How right he was.

Only two years later after John’s death at Newark, his infant son, then King Henry III, re-issued the charter alongside a smaller charter limiting his powers over the great forests of England. The 1215 charter, because it was bigger, became known as Magna Carta, and the smaller as The Charter of the Forest. Lincoln Castle is the only place where they can be seen together.
Magna Carta was re-issued in 1225 and then in 1297. It became the foundation of limits on the power of the King.
The short film you will see at Lincoln Castle traces the influence of Magna Carta through the Peasants Revolt of 1381, to King James I who asserted that he was King by Divine Right, to the Bill of Rights of 1689 when William and Mary came to the throne at Parliament’s invitation, right through to the growth of parliamentary democracy. In America and elsewhere Magna Carta was taken into the heart of their constitutions as standing up to the power of Kings. It is still quoted in American courts.

You will see Magna Carta in a darkened room; there is a sense of awe. Absolutely right!

This piece can also be found on the Visit Lincoln Blog

Phil Hamlyn Williams is a writer and his blog may be found at  www.philwilliamswriter.co.uk 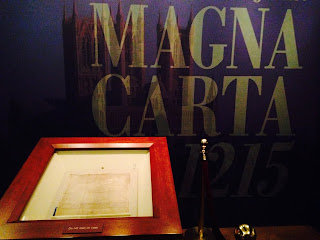 Magna Carta at the Library of Congress in Washington USA
Posted by PhilWriter at 20:17 1 comment: