Can anyone remember Len Marshall’s dance band playing at the Drill Hall?

In response to my last article, Ralph Williams told me that, as a small boy in WW2, he would sit on the stage and watch the couples navigate the crowded dance floor every Friday and Saturday night. Ralph’s grandparents were caretakers and lived in the house attached to the hall. His granddad would take great pride in keeping the dance floor shiny. His gran would serve refreshments to the thirsty dancers.

It wasn’t just Len’s band, or that of his wife, who took over the band when Len died; it was others: Ted Heath, Johnny Dankworth and Cleo Laine. Ralph spoke with special delighted of Ivy Benson’s All Girl Band, which he also managed to see later out in Egypt on his National Service.

New Year’s Eve was very special. Mrs Marshall would have dances going on not only in the Drill Hall but also in the Assembly Rooms and in a dance hall, now gone, opposite the Theatre Royal.

It wasn’t just dances. In the first floor room bordering Broadgate there was a private Men’s Club with bar and billiard table. At the other end, again upstairs, there was the Sergeant’s Mess Club also replete with billiard table.

On Boxing Day the shooting range to the right of the hall would be brought into use for a shooting competition and Ralph’s Dad, Arthur Williams who worked at Rustons in Boultham, would be a keen participant.

As musical tastes changed, so did the Drill Hall offering with the bands and performers such as Gene Vincent (with his famous hit “Be Bop A Lula”), Screaming Lord Sutch, Jess Conrad, Shane Fenton (later re-invented himself as Alvin Stardust), The Hollies and Ultravox.

There were local bands too, including the Sultans. The Hollies crossed the road after their Drill Hall gig to hear the Sultans in the old Ruston Club, aka Oddfellows Hall. Martin Phillips recalls that the Hollies complemented the Sultans on their version of Searching. Andy Blow told me another Sultans story: they were invited to support the Stones at the Drill Hall on NY Eve ’63 but felt they had to decline - they were already booked at Branston Village Hall! The Stones were a breaking band but it wasn’t yet apparent that they were going to be one of the biggest bands of all time.

In 2004 the Drill Hall re-opened with a broader remit. It was to be the performing arts venue for the city. This was not only a matter of hosting professional acts, but also being the space where local groups could perform.

There were talks, in politics, Tony Benn and Shirley Williams but also Roy Hattersley, Michael Portillo and Ken Livingstone. Outside politics the hall has hosted Melvyn Bragg, Germaine Greer who is back this coming summer, Will Self, Gervase Phinn, Jenny Agutter and Chris Packham.

There has of course been more music. Not only did Johnny and Cleo play the Drill Hall, but their daughter Jacqui Dankworth has appeared in two Lincoln Jazz Five gigs there. Darius Brubeck, son of Dave, has been another famous jazz visitor as has Jamie Cullum of course. Georgie Fame, The Kyle Eastwood Band and Dennis Rollins.

In terms of Folk, Fairport Convention have been back each year and there have been visits from Martin and Eliza Carthy, Seth Lakeman, Bella Hardy, Lau, The Unthanks. Julie Felix was a visitor last year.

All this is before I even mention classical music, dance and theatre. Did you see Ockham’s Razor when they first came?

What are your memories of the Drill Hall? 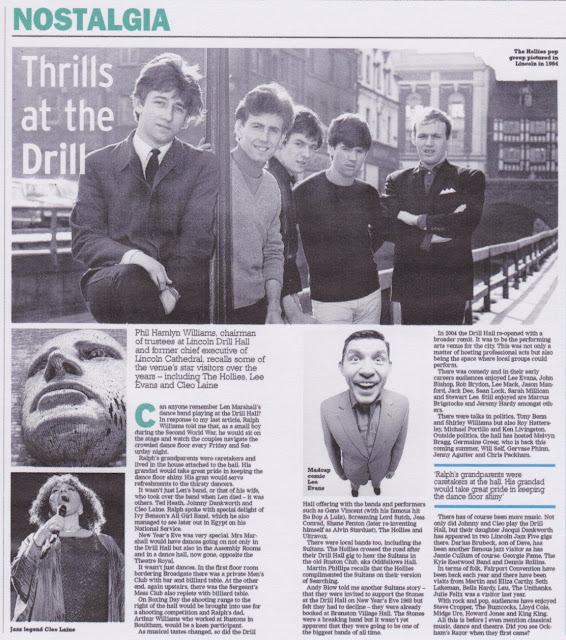 Posted by PhilWriter at 07:33 No comments:

John the Troubador surely must take his place among Lincoln’s Literary Heroes.

Never heard of him!

On 20 May 1217 a battle took place just outside Lincoln castle between two groups of English barons: one loyal to the boy king Henry III, and the other led by Louis, son of the French king, and supported by French troops. This battle must rank alongside the Armada and the Battle of Britain in its significance to this island.

Barely two years before, a similar group of barons had confronted Henry’s father, King John, at Runnymede and had persuaded him to add his seal to a list of their demands in the document we now know as Magna Carta. This document remained in force for just ten weeks when, in response to John’s pleading, the Pope annulled it. The battle lines were re-drawn with a group of barons seeking the support of the French with the objective of overthrowing John. Another group rallied round their king.

One of these was a septuagenarian, William Marshal, whom in his younger days had been a dashing, handsome young knight beloved by those fond of jousting. William stood by his king and crucially was by his bed when John died of eating an excess of peaches, or so the story goes. John entrusted the care of his young heir to William.

The rebel barons, under Louis, controlled London and the whole of the east of England, up to and including Lincoln, but crucially not Lincoln castle which was under siege and held by Nicola de la Hay, the widow of its previous castellan.

William and his troops controlled the west. In May 1217 reports reached William that the French troops had spilt into groups and so he grabbed the chance to take them on at Lincoln and so lift the siege of the castle. They camped at Torkesey and on the morning of 20 May marched into Lincoln. A fierce battle followed and the French and the rebel barons retreated down steep hill with the English in pursuit. The English were victorious and celebrated by plundering the city of Lincoln which they accused of being in league with the rebels.

How do we know all this?

John the Troubadour wrote it in an 19,214 line poetic celebration of William Marshal’s life. John had been commissioned by William’s son and he wrote it within ten years of the battle taking place using a good number of contemporary sources. The poem, originally in medieval French, has been translated into English by Stewart Gregory and David Couch and form the basis of Crouch’s William Marshal.

Phil Hamlyn Williams  - chair of Lincoln Book Festival, indebted to David Starkey who is speaking at this year’s festival in September 2018

Posted by PhilWriter at 22:03 No comments: