Positive reasons for remaining in the EU

Migration will be one of the biggest issues of the 21st century. If we want to add a British voice with a long tradition of welcome, we can do it so much better when joined with our neighbours.

For the USA it is the single issue of Mexico and Trump's horrific suggestion of a wall. For Europe, we have had our walls, or iron curtains, let us work together to find a new sustainable way.
Posted by PhilWriter at 09:25 No comments:

How debate may proceed

This was the first full day and began with disappointment that Boris Johnson decided not to follow his great hero Winston Churchill in working for the great European project. For it is a project, not yet complete, probably never complete.

The disappointment was dispelled as the Twitter accounts supporting staying in began to multiply. So many young voices demanding a future in an EU which it will be for them to nurture. Young voices that demand, amongst other things, proper treatment for refugees. 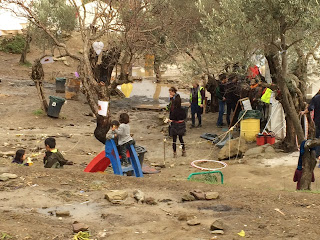 Moria Camp on Lesvos
Posted by PhilWriter at 17:38 No comments:

Ken Clarke and why we should stay in

'Being in the European Union gives us a much stronger voice in the great world problems of today.'

Zoe Williams' interview with Ken Clarke in Saturday's Guardian (13 February 2016) unearthed this key quote but also other important points that I set out here.

Talking of those who in 1975 would have left the EEC, he says, 'they were wrong. This country has benefitted enormously from joining the modern world.'

This to me holds the key, by being part of a body such as the EU, we are part of the modern world rather than a small country ploughing its own selfish way.

'I actually formed my political views, decided what I was in favour of, chose my party loyalty, quite quickly during my time as a student politician. Most of my views became settled:

Free markets with a social conscience, an internationalist approach to the world, welcoming globalisation and the opening up of trade.

I've always thought one of the problems for Britain was how to persuade the country to cope with the ever-accelerating rate of change. I have never gone through periods of guilt or doubt that the EC was going wrong.'

I can't help thinking how much better the direction may have been had Clarke had a great hand in it all.

There can be few British politicians more committed to the European project, yet Clarke is clear that it is the voice of the younger generation that must argue the case before the British public. It would be sad, though, if he remained silent.

His conclusion is, 'being in the European Union gives us a much stronger voice in the great world problems of today. Given that we have to earn our living in a globalised and competitive economy, the best base for our economy is the biggest single open market in the world, which happens to be the major place [to] which we we sell our exports and the major place from which we get our inward investment.'
Posted by PhilWriter at 12:17 No comments:

EU Referendum - forget the renegotiation; it is not what matters

'A place at the table where the rules of the world's largest single market are made'...'that is a seat no rational prime minster would vacate'.

'If Britain were to leave, Mr Cameron (or his successor) will promptly have to negotiate a way back into the single market, but from the diminished position of a supplicant to the very same leaders whose efforts at friendly compromise will just have been spurned.'

These extracts from the leading article in the Guardian of 6 February 2016 say it all, or nearly all.

The EU is a single market and that is where its true value lies. Nevertheless it is also a group of nations with a common bond who can, if they have the will, speak with a common and loud voice on the world stage. This stage is dominated by the USA whose future leadership is worrying, by Russia whose current leadership is terrifying (you might like to look at Natalie Nougayrede's article) and by China whose leadership for some time will be focused on massive internal issues.

British politicians have never since Edward Heath played a full part at the European table. If they fail to do so,  they have only themselves to blame if the direction in which the Union moves is not to their liking. Britain could and should have very strong voice.

If the British people are worried about immigration and the 'threat' of refugees, leaving the EU will not make a bean of difference unless they also wish for Britain to leave the world stage. Britain has much to offer the 21st century world but will be able to play its part immeasurably more effectively if it does so as a full and committed member of an EU run by the politicians of member countries and not by bureaucrats.

In relation to the renegotiation, Martin Kettle suggests that Prime Minister Cameron has achieved a good deal
Posted by PhilWriter at 16:30 No comments: