The UK's Future Relationship with the EU

I was asked what I thought of the deal, so I looked at the material placed before Parliament. I'm not going to read it all, rather I will rely on  the commentary provided by others. If that is enough to make you stop reading, please follow this link to a subject I do know something about.

Good. Let me start, as I did five years ago, as I campaigned for us to Remain. It was about far more than economics, as I wrote in a number of blog pieces in the run up to the referendum, probably not least this: the EU has kept us safe. At the start it was the practical, bringing under common control iron and steel - the raw material of war. For me, though, the key was free movement through which people get to know people of other nations by living alongside them for work or study. This enriches the individual and the country. It is not without its downside. Residents of Boston in Lincolnshire will point to the disruptive behaviour of young eastern Europeans who had come to pick vegetables, jobs eschewed by local people. They forget the similar behaviour of longer term residents of the same age, and of course any sense of offering a welcome to those visiting. The Future Relationship ends free movement. The failure of the UK government to buy into the Erasmus programme robs our young people of a chance to join in this truly international study programme. It breaks my heart.

The Future Relationship, by and large, is free of tariff barriers, and this is welcome; however, the way common standards has been handled in nonsensical. Surely, anyone seeking to trade across borders would welcome having only to follow one set of standards. To have such a scheme across twenty eight countries must be positive; the more the merrier. So why set up a parallel system, which in practice will probably follow EU rules except that we will have no say in their drafting.

I suspect services were too complex to bring within the Future Relationship Agreements, but again common standards must be worth having: a French audit compared to a British one; a German engineer alongside one from Scotland; a Spanish dentist or one from Wales; a Belgian optician or one from Northern Ireland? I do know that the devil is in the detail and country by country deals may emerge.

The big area, from which we have walked away, is the table of twenty-eight nations joining together to grapple with problems too big for single nations: global warming and migration, to name but two. Ideally the forum would be wider than just the EU, by twenty-eight is a good start. It is easy to point to the short comings of the EU, but why not make it stronger by being part of it?

The sovereignty argument has always been false. It is up to a nation which areas of law they choose to pool with other nations. Pooling makes sense in many areas, such as standards, but it is always up to the nation whether or not to pool. The Future Relationship has many instances where sovereignty is pooled, but in a more bureaucratic way than the existing EU treaties.

The immigration argument is probably where most tears will be shed. People I know who voted leave did so to 'keep out the Muslims' or 'to make Britain white again'. This is both ignorant and offensive, but played to by the Leave campaign. The Future Relationship makes minor provision for EU workers, but does nothing to stop the very much larger cohort of non-EU immigration.

I have little doubt that the deal is better than no deal. I also believe that British people will work hard to make it work. But we have lost something very precious and I for one will continue to campaign to win it back. 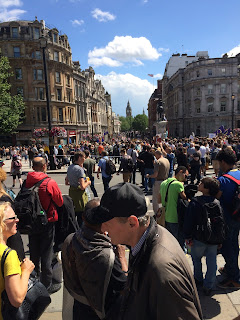 Posted by PhilWriter at 15:02 No comments: