One of my ambitions for the Magna Carta anniversary was for school children to engage with the ideas behind the great charter and to write their Magna Carta for today’s world. One such group has been doing just this.

With the help of an organisation called Index on Censorship about twenty school children came together some six months ago to create a project from which would come a Magna Carta for today. They presented the fruits of their labours at the Collection on 6 July. I suppose I had expected a list of new Magna Carta clauses. What I found was rather different. It was all about how they would, and indeed will, arrive at such a list.

These 16 to 19 years olds were all involved in youth groups and had responded to a request for volunteers for the project. They didn’t know each other and so the first task was to do just that. It was about listening. The project could only work if they listened to each other, to the many people they would consult, to ‘experts’ - those who had been working in the area of free expression, and to voices from the past.

When I was a teenager, I don't remember listening as something I did. I had plenty of views and would happily talk about them, but listening, well not really. My wife would say that nothing changes. It did make me stop and think.

The young people explained that for them the means for their voice to be heard was to be found in the social media, Facebook and the others. I have certainly seen this, most particular since the referendum all sort of views have been positively flooding the ether.

At the presentation we were invited to ask questions and I asked, what about their contemporaries who are less articulate? How do they get their voice heard? The young people who presented were outstandingly articulate. They explained to me that with social media, anyone can express a view and long carefully constructed arguments are not needed. They felt sure that they would hear the views of a wide spectrum of young people.

So what about older people? This was my next question. They didn’t have an immediate answer but would work on one. I am certain that they will.

It was not a question I asked lightly.

These past few weeks have been a time for listening. As I have written before, I spent time on Lincoln High Street handing out leaflets about the referendum and people stopped to talk. I listened and, whilst listening, I became aware that much of what I was being told has not been listened to by those in power. People have been talking about fear, about loss, about anger. I have the impression of people living in a different world and, of course, it is. There are two worlds. Those of us just about keeping up with the pace of change, and those many who have been left behind perhaps without jobs, perhaps in neighbourhoods which have changed beyond recognition, who feel excluded.

I told the young people about this and they were outraged. To be listened to is a right to be defended. Something perhaps for our politicians to ponder.

You can find out more about the project on their website http://www.whataliberty.co.uk Magna Carta 2.0 @magnacarta_2016 Facebook/Magna Carta 2.0 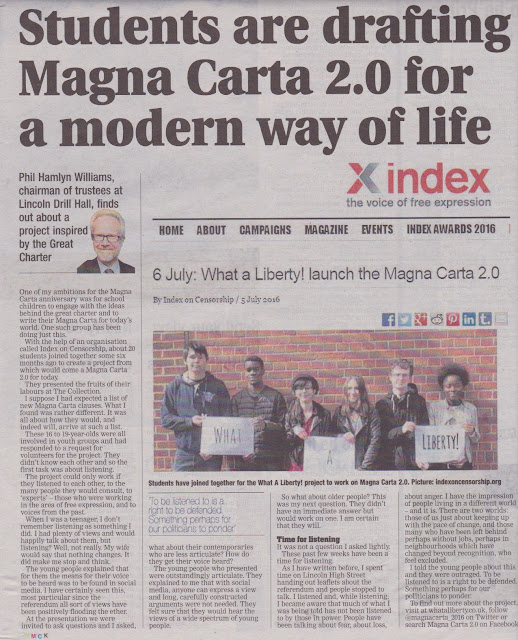 Posted by PhilWriter at 16:40 No comments:

I am certain that the writer in last week's Lincolnshire Echo is right to point to the underlying reasons why so many Lincoln people voted to Leave the EU.

During the campaign, whilst leafleting on the High Street, the one thing that struck me most clearly was that many people were simply angry. They had concerns, and, yes, one was immigration. These concerns were not new; they simply had not been listened to by government. Now, at last, there was a chance to be heard.

To vote to leave the European Union was a pretty blunt instrument and one which will have ramifications for many years to come.

I just hope that the new Prime Minister, whoever that will be, has heard the underlying concerns and will now act.
Posted by PhilWriter at 09:06 No comments:

Time for an initial reflection on the March for Europe.

Many thousands of passionate angry people, all ages, families, very many young men and women marched today. They are the ones who can see clearly what they stand to lose.

Absent were those who believe they have been forgotten and shouted loudly on 23 June.

Parliament cannot abrogate its duty. It is for parliament to consider the result of the referendum. We are a parliamentary democracy.

MPs must debate in Parliament whether or not to advise the new Prime Minister to trigger Article 50. In doing this they must take serious note of the referendum result and of the claims and counterclaims made that have influenced the result.

They must listen to the voices that had not been heard. People are fearful of immigration; they have lost the world of traditional jobs and they see people from other European countries taking some of the jobs that are left.

MPs must also listen to the passionate people with whom I marched today and who truly care about addressing together the massive issues that lie ahead: the refugee crisis, global warming, global business and the gap between rich and poor.

MPs must consider what is best for Britain but not neglecting the effect on the rest of Europe and of the world.
Posted by PhilWriter at 17:23 No comments: