In 2022, we are facing an economy where there are many low paid jobs, too poorly paid to begin to support a family even if both partners are working.

This contrasts with the 1950s, for example, when employment in manufacturing was high, the mines were still functioning and the railways employed many people. The rates of pay, although not great, were just about sufficient.

In the years in between, manufacturing, mining and railway jobs have reduced dramatically. They have been replaced by jobs in the service industries which are often poorly paid, not full time and insecure.

It is fatuous for politicians to pretend that the old jobs will return. Manufacturing, although buoyant, is no longer a major employer. The mines have closed and, with net zero, will remain closed.

With largely a service based economy, what is the answer? We remain a wealthy nation; we need a mechanism by which that wealth can be shared. 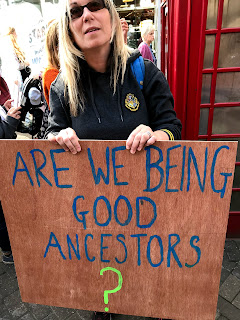 The image is of a climate change protest in Lincoln in 2019. The question on the placard is every bit as pertinent to this issue.
Posted by PhilWriter at 11:11